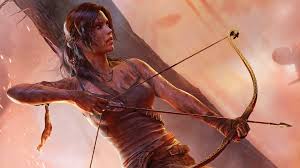 Lara falls off a cliff and is caught by a rushing mudslide. As mud and debris tear down around her, she pulls out her shotgun to blast away a man-made barrier that is for some reason in the middle of this waterfall. She succeeds, but she sees another drop where the mudslide stops. She falls over the edge, crashing down onto the ground face first.

“I bet the others found a faster way down,” she pants as she rises, with zero bones broken and only minor lacerations across her arms.

In rebooting the wayward Tomb Raider franchise, developer Crystal Dynamics has turned protagonist Lara Croft into a combination of the X-Men’s Wolverine and Indiana Jones, an archaeologist with a shocking penchant for killing and the ability to withstand incredible amounts of physical damage that only bones made of adamantium could allow.

The main problem here is that the writers and the game designers do not seem to be on the same page throughout the game. Lara expertly mows down countless men with efficiency, leaps and climbs perilous mountains with superhuman strength and endurance, and survives an inordinate amount of damage. But the writing tries to portray her as this aforementioned young woman who is just scared and fending for her life, even when she is kicking ass.

But the ass-kicking and superhuman climbing aspects are what Tomb Raider excels at.  Lara being a great shot may break the story but it makes for thrilling combat scenarios. Composed of a series of small, linear environments with some branching points and vertical elements, the game sets Lara up against a lot of people to kill and items to hunt.

Gunplay is responsive and furious, with enemies actually trying to flush Lara out of cover and flank her. But Lara is agile enough to dive from cover to cover. When you can mix up weapons and keep moving like this, the game is genuinely exciting, especially if you are jumping from rooftop to rooftop in a firefight.

When Lara isn’t shooting, she’s climbing. Again, no 20-year-old college student could do what she does, but it’s so damn fun to scale mountains with just a pickax and her upper body strength. Or to maneuver up and down enemy encampments to get a better angle.  Or when she shimmies along a rope, at an upward incline nevertheless, for hundreds of feet. The bow quickly becomes just as efficient at navigation as killing because Lara can use it to cross great distances and get to hard-to-reach places.

During some of these segments, the game puts on its Uncharted impression. These epic crescendo moments often throw Lara into linear set-pieces. When these set-pieces don’t require infernal quick-time events, and just relies on player skill, they shine. But if you fail, Lara will experience a gruesome death.

And the term “gruesome” describes Tomb Raider’s tone well. Buckets of blood and literal rivers of gore permeate several levels. Bodies lie as ritualistic sacrifices. Lara plunges her arrows into men’s eyes as they scream in pain. This is a B-grade story about mystical island spirit queens who control the weather; why is this here? The violence doesn’t fit at all. In trying to take itself so seriously, Tomb Raider’s story just becomes laughable and the only entertainment value to gain from it is to see how far they go with their own bewilderingly stone-faced presentation.

The gore could work if the writing and voice acting weren’t terrible. Cliches drip from writer Rhianna Pratchett’s script as does terrible dialogue (“adventure found me,” claims Lara in an internal monologue). Every character is a one-dimensional archetype: he gruff mentor, the arrogant scholar, the campy bad guy, the spiritual big man and so on. Even Lara is really just a Joseph Campbell-esque hero character. No nuance or subtlety here.

It also doesn’t help that only two of the main cast sound like they’re there to work. The aforementioned “lead archaeologist” scholar guy lays on his cheese thickly enough to choke you. And Camilla Luddington does not sound convincing at all spouting Lara’s inane exposition. But that same exposition describes, with zero self-awareness, the mystical island nonsense. The game’s serious tone doesn’t allow her to at least have fun with what she’s saying and so she just sounds tragically out of her element.

“A survivor is born” is the phrase that graces the closing screen of the game, but Tomb Raider is not about survival; just killing. And those are not necessarily one and the same. Yes, in this game, you must kill to stay alive. But that is the only fleshed out mechanic the game offers. There is no reason to hunt for food, to try to stay warm, or to scavenge anything other than become a better killer. Or a better collectibles-hunter. 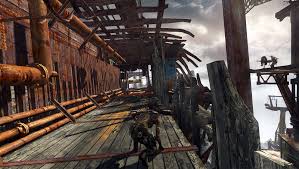 But some of these upgrades don’t matter at all. For example, the first mission of the game is to hunt and kill a deer for food. Then, Lara skins it and eats its flesh. From then on, killing an animal and skinning it only nets a paltry bit of experience points. There is no hunger mechanic to satiate, and you only salvage parts to upgrade weapons or Lara’s “Survival Instinct,” aka Batman’s Detective Mode. And then there are the execution upgrades. You can upgrade Lara to execute men with any of her weapons, including the pickax. All of these are separate upgrades and all result in the same thing: gory death. What’s the point of them besides outright savagery?

No two parts of this game complement each other. The story and gameplay constantly contradict each other. The tone doesn’t fit the B-movie subject matter at all. Its intended theme of survival is not reflected in the gameplay at all. It’s so frustrating because when the game gets going and it’s just you, Lara and the island around her, it’s a pretty damn good one. But that is almost buried under awful writing and voice acting, and too many disparate elements to form a cohesive whole.